Dating back for a week..
Before dad's arrival in perth due for the weekend, I actually made something edible out of those dumb pots in the kitchen. Had rice because I got really overwhelmed by pasta. Wasn't anything incredible, but just took me some effort to watch the fire and water. I reckon the only reason why my rice doesn't look shiny is because I didn't add much oil at all. Lesson learnt! Other than that all wasn't too bad. 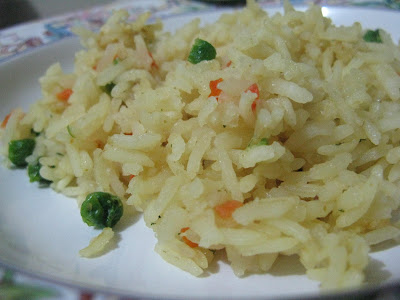 Thanks to my canon camera for all these pictures.
---------------------
On friday I left my student village and left for the airport at 11.20pm, took a taxi and it cost me $45. Was really expensive but no choice..the whole public transport probably take about 2 hours and I have to leave at 6+ because the last bus/train is around 8 i think!! It was crazy so I went ahead with a taxi.
Dad's first time in Perth..touched down at about 12.30am..got our rented car from Hertz and we headed off finding a hotel. lOl. finally found one at 2.30am and we realised we were really hungry. Drove around again (seriously, when we were driving around perth, we didn't know where we are, we just kept going, the GPS is screwed up) and found Mac 24 hrs drive-thru. *relieved. Had a very fulfilling dinner with a cuppa latte at 3.30am, and we both slept at 4am. hahaha. It was tiring-lost-hungry-relieved-bloated-shag for my dad then..
2 days was all he got to pass me one luggage and get to understand my life here, out of home, and in the university. I've never felt as relieved when I saw him at Perth airport; the moment he stepped out of the arrival gate. I can imagine how he feels too... going into a foreign country, and expecting to see his own son waiting to receive him, not knowing how life had been for him the past 3 weeks. But I reckon it was really a bad time to come during the weekends..sunday was dreadful..he spent 3 hours in my village room, while I shared with him everything I've got in my mind from the day I touched down. He took a short nap and then he had to go. All was too fast and brief for anyone to feel settled down. Walked him to his car, showed him the direction to drive out of campus..and I bade him farewell soon after.
All that I told him was we'll meet again at home, end of the year. To the airport, and a couple of hours later he called to say all was well and he's ready to board the plane. From the moment he left campus I didn't have the mood to study at all, tried really hard to do some reading but my mind was obviously somewhere else, and focus definitely off. Slept at 11pm and woke up early the next morning to catch up with my readings...I really hate to see him leave. Got really sad that night..oh well..
--------
Been a week already, week 4's over and today's saturday! week 5 is a break for everyone..and almost all my friends went back to their countries for the break..the village's so quiet in the morning, and I dread waking up...which is usually not the case. Had this friend of mine..who also came to perth without any friends/relatives around. We've gotten so used to each other's presence that when she leaves, the feeling of something's missing lingers around all day. It felt so different... things really change when you're out somewhere by yourself and learning to, in a sense, 'grow up'.
After 4 weeks, I found out there're less than 40 pre-vet students this year..with about less than 20 additional spaces available for students to get into vet science in 2010, from other degrees such as animal biology, biomedical sci, forensic, microbiology..etc. essentially pre-vet means guaranteed entry into 5-yr vet science, provided you pass all units in pre-vet year. It's really a tough battle out there with people trying all means to get into Murdoch's vet science. Another thing which I find really insane, is that I'm the only singaporean vet student this year..maybe next year I would see one or two more popping out.
--------
Last night went to domestic airport to meet up with cheekong, who needs to transit in perth to get back to singapore urgently. It's really crazy, he called me before he board the plane and there we are, meeting at the domestic airport, at 12.30am. Can't imagine how he felt..with all the nonsense going on in his mind. Drove him to the international airport (got my friend to lend me her car :P) and we caught up with each other at the cafe. Lots to share. Went into departure hall at 2.20am. I left at 2.30 after paying for the carpark ticket.. 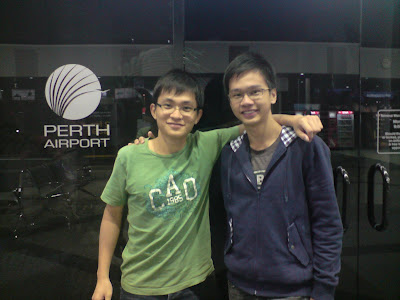