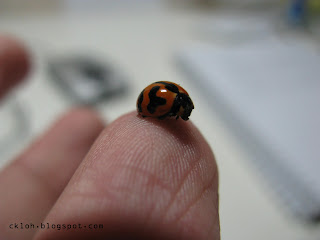 One evening while preparing dinner, this ladybird caught my attention amongst the leafy cabbages. Thinking it was dead after being washed and soaked, I brought it to my room, much to my interest in this beautiful insect. I placed it under my table lamp, and supposedly the heat brought life back into the ladybird; I could feel its tiny legs struggling to crawl across my palm as I picked it up after dinner.

Pulled my camera out, and gave it a shot. Owing to my camera for being able to capture macro-shots at such clarity!

Many issues over the weeks left me pondering what has exactly become of human nature. While there are a significant proportion of us speaking up for animals whom can't speak for themselves, we are often lacking in power as opposed to the fewer others on the other side of the fence. We certainly have strength in numbers, but it always take us an enormous amount of effort to turn the tables around. It puzzles me immensely. It seems that politicians never understood science, and scientists never agree with politicians. The ongoing war with contrasting ideologies never seem to come to any common consensus.

Firstly, it's about sustainable fishing. The ocean can no longer support us anymore. Take the blue-fin tuna for example, for sure it is an endangered species and the numbers have crashed dramatically over the years.

The graph is with respect to the Western North Alantic population of bluefin tuna. The dotted line shows the level we should be fishing at to sustain the population. Just over 4 decades of overfishing, we are only left with 3% of the origin population as what we started off in the 1960s. However in May 2010,  the Center for Biological Diversity filed a formal petition with the Secretary of Commerce to have North Atlantic Bluefin Tuna declared an "endangered" species and protected under the U.S. Endangered Species Act. (http://www.biologicaldiversity.org/news/press_releases/2010/bluefin-tuna-05-24-2010.html)

This is just one of the studies done of many thousands soon-to-be endangered/extinct species, it took almost 50 years and driving the bluefins to almost extinction, before any action is taken. In order to allow the population to grow back to the healthy numbers, we should be fishing at about 10 tonnes of tuna per day. 15  tonnes for sustainable fishing, but right now we're fishing at about 60 tonnes/day. The figures are staggering.
We will run out of fish by 2040 if we continue to fish at this rate. This is certainly not an exaggeration and politicians clearly don't respect the science.

Improvements to the fishing equipment and nets must be done. Thousands of unwanted sharks, sea turtles, sea birds, corals are harvested when nets spanning a few tens of kilometres are reeled in.

Secondly, marine parks... which don't make any sense to me at all. I don't wish to comment any further.

Thirdly, again politicians making unnecessary knee-jerk reactions to hunt and kill any wildlife that poses threat to humans. Do we not understand the risks involved when we are in their territory? Billion and trillion years of evolution have supposedly made human more intelligent as we put ourselves in the uppermost class. I see we have become too smart for ourselves, making irrational and illogical decisions. If politicians want their people to be safe, then ban sea sports, ban entrance into national parks; and stay in the safe and comfortable cities where crime rates are thousand times higher than human fatalities that occurs in the wild.
Shouldn't more resources and manpower be focused on what's happening in the communities, than to try hunt down which wild animal exactly kill a man, in a wildlife reserve or ocean for that matter? Is killing the animals responsible, justifiable? Why call it a wildlife national park, when we want to make sure all animals pose no threat to humans? What happened to the whole purpose to conserving wildlife, in national parks?
I refer this case to the grizzly bear hunted in Yellowstone national park, 2010.

I'm truly disappointed, and deeply saddened by what's happening around the world, every second as I write this.