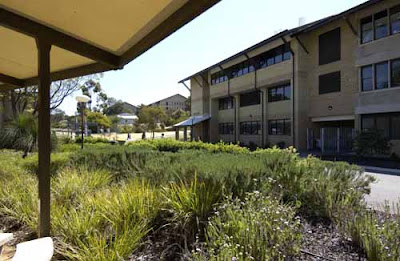 Murdoch Campus.
So, this is the start. The start of chapter one. This chapter started off by how a twenty-year-old took 3 weeks to gather all the things he needs to pack, and only started trying to arrange things into the luggage 3 days before departure. Tried miserably to organize his room so that it looks more appealing and neat. For a moment he feels satisfied that he's gotten and bought all that he needs, the next he sweared at why he hadn't gotten a soap bar (extra powerpoints) cause he reckon that there'd only be one powerpoint in each room in hostel.

It's true. People say he can never finish packing cause he will always feel that he forgets to bring something along. He thought he could pack his luggage like how he does it with the army duffel bag. He used to do the packing within the night. 25 kilograms. It'd be just a fraction of a survival-kit-for-international-students. Who would have thought he left his running shoes outside the house after finally squeezing all the items into the luggage. And with running shoes in, he remembers he needs to pack in a pair of slippers too. He takes occasional breaks, and plays fifa online 2.

Tomorrow he leaves for Perth, leaving a worried dad behind. And possibly an anxious ah ma. He will visit ah ma tonight and then his sis. It would be a seemingly normal thursday for most of us but the world has entirely changed for him. Giving it a second thought, it is indeed daunting enough. He doesn't know what the future holds for him but if he doesn't take the first step he probably will never know. A chapter too tiny to hold the thousands of self-reflections and thoughts. Even the most bombastic words seemed too plain to elaborate how he saw loved ones around him felt.

Chapter two shall go straight into orientation week, starting semester one and moving into autumn followed by winter. Before that, 11th Feb is finally making it's final march.
Posted by CK at 12:52:00 AM