Orientation week isn't always the most fascinating part of a undergraduate's life. At least not for him. True enough, no lectures, no assignments, no labs. The orientation here is so different back at home where he's heard lot's of stories on fright night, crazy games, and outings. No they weren't split into different groups, they're just given a timetable and it's up to them to follow. No they don't have games like that, it's pretty much of following a senior school administrative officer around (together with students from their own faculty), and they introduce different places like the library, the international student centre, the different buildings (eg. Economics and Humanities building, the Veterinary Building (VB).. etc). He only found this out when he's done on administration on thursday, and on friday where he got to know more. He actually practically missed out everything. Orientation doesn't start on the 9th feb. It starts on the 2nd Feb. He doesn't really care because he can only arrive on the 12th.

Two days was all he got to open a bank account, get all the necessary telegraphic transfers details and send them to dad. Get his student card done (24 hours to be ready), get his australian number activated so he doesn't have to waste money on auto-roaming charges. Get his units/modules enrolled (school uploaded the wrong version to his account previously that's why he couldn't get it done back at home), sign up for lectures, tutorials, lab sessions and attend a few introductory lectures in campus. Next he needs to get his smartcard (bus/train concession) done up, then to the bookstore where he tabulates his booklist and buys the textbooks. Two days was again all he got to list out all the reference books he needs and get his dad to send them over (it's expensive to send books over, so he's going to do it once and for all)

On Friday, he went down town with a few students from singapore to get a pillow and hopefully a fan. After getting all that he got to the supermart (a 20min drive's distance away from campus) to get some food items so he can survive the rest of the semester. He doesn't really know what to get, and so he got a bunch of bananas, coffee powder, a bag of sugar, two cans of campbell soup, white bread and peanut butter. Oh yes, and he got his textbooks on friday. Went back dorm and signed up for a internet plan with the student village, went online for a while before reading up on the texts. Studied till about past midnight in his quiet dorm room and fell asleep straight after. 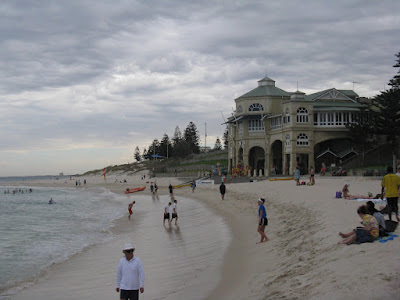 On Saturday morning he met up with this girl who's studying biomedical science yr 3 (exempted from first 2 years) from singapore as well, since she's staying close enough to where his flat is. Met up with the rest of the guys and head to Cottesloe Beach for a BBQ. On the way he just knew more and more friends esp from malaysia and students from other universities. BBQ wasn't exactly great, they just had a sausage bread, that's all enough for everyone to chill by the beach. Before that they were warned of the recent incidents of shark attacks, but everyone just dived into the waters! Lovely beach, soft sand, great sun. Clean beach as well. 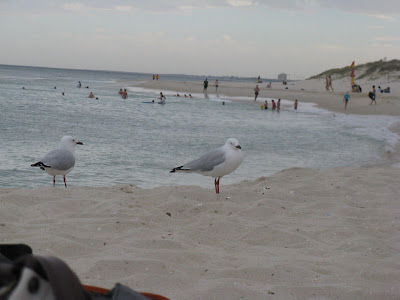 After getting back to campus he headed to town again with sebastian (he was the one who sat beside him on the plane to perth, doing 2nd year of econs) to get a printer. He reckon he'd need it urgently for lecture notes and assignments. Library's gonna cost everyone 11 cents per page! Went Belmont Forum's Dick Smith..and then another Dick Smith down the road, before finally getting his Canon Pixma colour printer at $64 (black + colour cartridges included)! He hopes this canon printer of his serves him good for another 6 years though.

Reached dorm at 6 and begin wondering what he should have for dinner.. He doesn't have much to cook..only the cream of mushroom soup looks appealing enough. Took a nap till 7. So now he realised he needs to add milk and water to the can of mushroom soup after (still) having difficulties to finish the whole bowl of it. Drank it with a few pieces of bread, that forms his dinner. He doesn't like it this way. Back at home where dinner's so easily available everywhere (if home's not cooking), till late at night and what nots. Here everyone goes home at 4.30 or 5 in the evening, and he can't possibly get to town after 7pm for the fact that the buses come once every hour and it takes some time to get down, and buses don't run till so late! Probably the last bus comes at 6 or 7pm?

The feeling of screwed is when you've got absolute nothing to cook in dorm, you look at your watch and it says 6pm. There it goes. Lucky for him to have a long long loaf of bread which he can munch on while reading his notes. Life has really changed. Never has he felt so lost, and didn't know what to do before. Room-mates are always out till late and it gets kind of spooky at night alone in an apartment setting. His group of mates went town to club, but he doesn't club. Another mate of his went out with her mom..

And so today's already 14 Feb. Happy valentine's day to you. Twenty-0-nine and he's still a long serving member of the SAA club. Single and available? Just wondering...

With this he sets his target for semester 1:

Bearing in mind how much effort dad put in to bring him through his veterinary undergrad, he swore never to let him down. He reckon he still has a 4 yr old brother growing up and it is going to add on to the financial burden..

Chapter 3 shall go more into details when semester starts and managing the hectic timetable. He should have already been warned, vet study is a marathon.. picking up pace at the start of the marathon is never a downhill task. Next chapter shall say more when he dissects a piglet the week after, followed by a chicken, and a toad, and god knows what else the farm has.